Single story house plan has many metal shed roofs with low slope, combine facade cladding made of fibercement siding: vertical and horizontal. Combination of large and narrow windows gives dynamic look to this comfortable house plan. Basement under the main area gives you an ability to have utility rooms far from living areas and adds an additional area of 137 square meters to the main area of 169 sq.m.

Vladimir and Valeria came to me one day. They liked the view of the frame house SS-89560-1-3 with several shed roofs, combined facade cladding and panoramic windows. The only thing they did not like was the wooden frame technology. Despite my attempt to convince them that it was one of the best construction technologies, they insisted that I make them a design of this house from Wienerberg ceramic blocks.

The manufacturers of ceramic blocks claim that their products make it possible to build energy-efficient houses even in harsh climates. Maybe that's true, but it requires 51 cm thick walls, which significantly reduces the usable area of the house. In addition, building a house from ceramic blocks, although faster than from ordinary bricks, is much slower than from wood or monolithic concrete. Vladimir and Valeria wanted to clad the facade with fiber cement board, and for this they still had to somehow attach a wooden or metal frame to the wall, which can only be drilled with great care. All this required monolithic concrete work, both for the construction of the foundation and for the construction of lintels over windows and doors and distribution bands on top of the walls to fasten the rafter system.

Another important fact is that for such thick walls it is necessary to build a powerful foundation, although the weight of the walls of blocks is not too large. This makes the construction of a house more expensive. So it was decided to build a house without a basement to somehow reduce costs.

The house plan was ready in three weeks. They paid about $2,000 for it. But when they came to get the ready house plan, they said that their friend had built the house using ICF technology in two months. This friend's neighbor built a house of the same size, but with ceramic blocks in six months (no finishing). Two years have passed since then and it was possible to compare the heating bills of both houses. The bills for heating a house built according to ICF technology were three times less than in a neighbor's house. I also spoke about the additional benefits of increasing the area and could immediately show on the plan that changing the wall thickness from 440 mm to 300 mm increased the area of this house by almost 20 square meters.

Convinced of the benefits, they wanted to change the design of the house.

For unwillingness to listen to the recommendations of the architect, they had to pay an additional $500 for the change of construction and another $500 for the creation of a plan of residential basement. They paid 50% more for the house plan, but building a house using ICF technology will still save them money.

Since they decided to make a basement, the laundry room can be moved there by making a hatch with a pipe directly into the dirty laundry basket, since the laundry room is located directly under the bathroom and dressing room.

There was also no need to install heating and water heating equipment in the garage. It was decided to place it in one of the rooms next to the mantelpipe so that a ventilation pipe could be led through it on demand to accommodate gas equipment. It was also necessary to make a window in this room. Since the basement of the house was not high, it was necessary to make a well.

In the far room of the basement there will be a home theater.

With so much extra space now it is possible to arrange a sauna in the basement as well.

In addition, Valeria massage therapist, can now equip a massage room and shower with hydromassage.

Cantilever stair to a basement in a modern house plan

In the future I will tell you about the construction progress of this wonderful house. 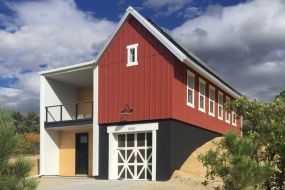 Barn house Style Plan For an Up Slopping lot 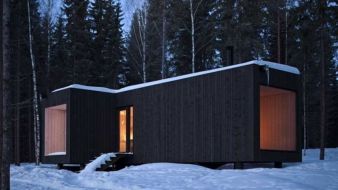 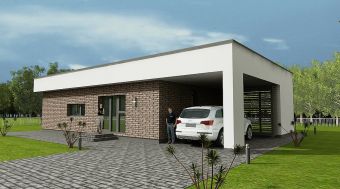